Goa is a unique place in the lap of the Indian sub-continent. It portrays a blend of the sea-loving Portuguese culture as well as the sea-side residents of India. This blend of culture is evident even in the architecture and monuments of the union of Goa. One such wonderful monument found in Goa is the massive Fort Aguada, located by the Sinquerim Beach, by the Arabian Sea. 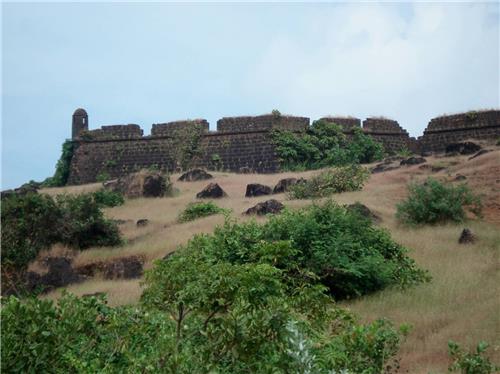 Established in the 17th century, the Fort Aguada is one of the largest and majestic forts, not just in Goa but also across the country. The fort is very strategically located within Goa, making it quite close to several hotels of the region. This fort is one of the most popular forts and tourist spots of Goa as a result of its strategic positioning. The Sinquerim Beach or Aguada Beach, which is adjacent to the fort, receives the maximum number of tourists among all the other beaches of Goa. The tourist footfall includes both Indian and foreign tourists on a regular basis. But before digging into it, a look at the history of the Aguada Fort is also necessary.

History and Architecture of Fort Aguada

The Fort of Aguada, Goa was established in the year 1613 of the 17th century by the Portuguese invaders, who intended to protect them from any sort of invasion by the Dutch or the Marathas.  This is one of the main reasons why the culture of Goa is highly under the influence of Christian Portuguese culture even today. The history of Goa and most of its monuments display the picture of a westernized culture and country rather than that of an Indian background. 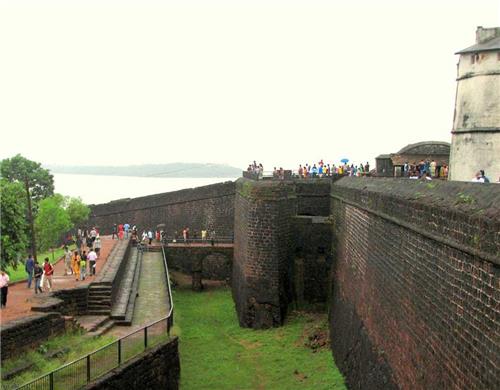 It’s the same in case of the Fort of Agauda. During the 17th century, the region where the fort was built was the point where most of the vessels which came from Europe, would dock and try to invade from. Therefore, this fort was built to block any attempts of invasion or breach from other European countries and protect and ensure the security of the Portuguese who had landed and camped in the current region of Goa. The fort not only has a beach adjacent to it but also has the river Mandovi flowing by it and it used to be the defense weapon for protecting the nearby region of Bardez. The fort was also meant to protect all the shipping processes and transactions of the Portuguese.

Within the fort, there was a natural Fresh Water Spring which used to be the source of water supply of all the ships which docked there. In fact the name of the fort has been inspired by this natural spring since water is referred to as Aguada in Portuguese language. This fresh water spring used to attract a number of sea-farers to stop by and replenish their water storage and move on with their journey.
Apart from this, there is also a huge and well-maintained lighthouse standing erect on the fort since the year 1864. It is almost four-storeys tall and is still used for directing and guiding ships looking for a place to dock. Until 1612, there used to be 79 canons along with the largest fresh water storage of Asia during the 17th century. The fort was then divided in to 2 parts-the upper and lower section. The upper section used to be the protecting fortress and storage area of fresh water while the lower section acted as a safe dock for the ships belonging to the Portuguese invaders.

The upper part of the fort has many a things including a moat, gunpowder room, the lighthouse, an underground storage area and bastions along with a secret escape passage which was used during wars and battles or even emergencies. This popular lighthouse initially emitted light in every 7 minutes but by 1834, it was upgraded to emit light every 30 seconds ensuring safer passage and docking of Portuguese ships. In spite of its importance it was abandoned and is now standing useless since the year of 1976.

This fort was one of the most marvelous creations by the Portuguese in the lap of India. It showcases the lifestyle, culture and dangers associated with these, sea fearing people of the west. This fort was also used as a prison during the time of the Salazar administration and houses some of the political opponents of the administration. The prison is also said to have housed many foreign tourists who were found to have been involved in some sort of drug felonies.

The Fort has many renowned hotels within close proximity, ensuring frequent visit of tourists. Its adjoining beach is lined up by many sea-facing restaurants and bars along with adventure sports meant primarily for tourists. This fort and the beach are not to be missed if you intend to complete your tour of the mysterious yet fun-filled Goa.