There have been several additions to the state of Goa, to make it a more tourist friendly place for those who are visiting with family members which include kids. The National Council of Science Museums (NCSM) working under the Ministry of Culture of the Indian Government, has also taken it up as an initiative to make the common man more familiar with science and fun for learners and kids with the establishment of science centers across the country.

Establishment of the Goa Science Center

Since, Goa is anyhow a popular tourist destination; the intention of the Government of Goa was to make it more attractive for various visitors and not just honeymooners or bachelor parties or parties in general. Therefore in association with the NSCM, the Department of Science Technology and Environment, invested almost Rs. 1 crore behind the establishment of the only Science centre in the state of Goa in ages which is also one among only 26 science centers situated within India.

The herculean task of building this Science centre was begun more about 1999 but was efficiently in just 3 years in May 2001. The Government of Goa, leased a land area of almost 5 acres for the completion of this unique project in the land of Portuguese advent in India. The centre was constructed near the New Marine Highway, Mirmar, Panjim which is a prime location in the capital region of Goa.
The complete work of development related to design and fabrication of the exhibits in the centre was supervised by the Nehru Science Center of Mumbai, since it is the regional headquarter of Science centers in the western region of India.

The Science centre in Goa is located close to the gorgeous Miramar Beach, adding another attraction for the tourists who come to visit the place. It is only about 15 kilometers away from Karmali Railway Station, which is its nearest station, about 35 kilometers from the Goa Airport and around 4 kilometers only from the Panjim Bus Terminus. 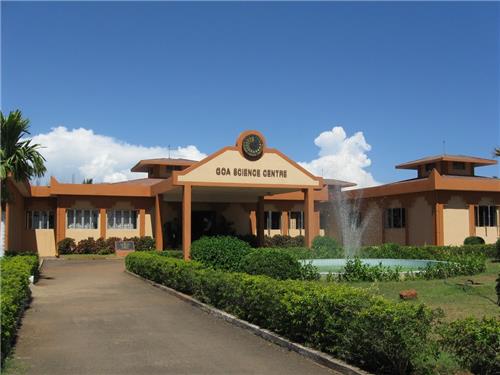 Activities in the Goa Science Center

Several workshops and activities take place in this centre primarily targeted at students, as they include Aero-modelling Workshops, Computer Training Program, Electronics Workshops, Electronics Workshops, Vacation Creative Science Workshops and much more. These workshops make it attractive not just for visitors but also for the students studying in Goa and the locals who intend to educate themselves about different skills associated with science and technology. Many students from other parts of the state and the surrounding states also come to participate in these workshops, as many special programs are organized in this Science Center of Goa.

This is more of a lecture session on the different aspects of science and technology which is organized annually in association with the NCSM at the national level and the State Institute of Education at the state level by the Goa Science Center. Participants deliver their lectures with the aid of slides, charts, posters, presentations and more for almost 6 minutes and the of these are selected to take part in the National level seminar.

This is more of a fun-filled activity meant to help science students associate, science with fun and entertainment rather than just bookish jibber-jabber. Demonstrations are provided on different subjects like Chemistry, Physics, Biology, Botany etc.

Quiz contest are primarily held to test the knowledge and understanding of the students. Children from different schools and colleges participate in this contest, held on annual basis

Creative Science Workshops provide an opportunity to students to help them develop technical skills and integrate their knowledge with the help of experimentation. A 10-day long workshop is conducted during Summer Vacations or the festival of Diwali associated with the subjects of Electronics, Computers, Science, Aero-modelling etc. for interested students. Activities which are barely found in the regular school or college curriculum, such as Toy making, Real Life Scientific Experiments and Projects are incepted to be carried out by the students.

Science Drama refers to Drama and skits contests which either deliver a scientific fact or help students comprehend certain features of science through the medium of drama. It is considered to be an effective way to communicate with students interested in learning the nuances involved with such a vast subject as Science. It also helps eradicate any kind of social stigma and superstitions by scientifically and logically demonstrating their insignificance.

National Science Drama Contest is organized every year by the NSCM for School Students and has received a lot of interest from students across Goa. The Goa Science Center organizes the State level Contest in order to shortlist the team that represents Goa at the National level of the Science Drama Contest.

The Science film festival showcases Sci-fi films and feature films associated with Science and Technology for a period of one whole month. The films are nominated and then selected by students and Science teaches. This festival is almost 2 times in a year, for students as well as for general public viewing. Schools are notified about the event through circulars while the public is informed via press releases.

The National Astronomy Olympiad, is organized every year by the Indian Association of Physics Teachers and National Council of Science Museums, which itself is associated with the International Astronomy Olympiad. This Olympiad is organized in India at Mumbai’s Nehru Science Center. The winning team of students from those who participate in this Olympiad is selected to represent India at the International level. The same is also conducted at the state level and the one held at the Goa Science Center helps select the participants from Goa.

Numerous engaging and interesting Science Shows are held at the Goa Science Center on a daily basis along with various special Scientific activities and programs suitable for people of all age groups. These functions include 3-D Films Screenings, Scientific Lectures, Planetarium Shows, Cyber-lab Shows etc. and are featured every day.

The Goa Science Centre has a computer lab, with all the modern amenities associated with technology and computers, which is meant to spread IT awareness among the public. Daily Multimedia classes or sessions are conducted within the lab for tourists and visitors while regular Computer training programs for Teachers, Students, Senior Citizens and Homemakers are held.

The Goa Science Center holds a mini planetarium with an inflatable circular dome on which the night sky can be projected to comprehend star patterns, watching constellations from a close proximity. This planetarium also holds interactive shows on astronomy every day.

The Science centre of Goa consists of a large air-conditioned auditorium with the capacity of accommodating 140 people. This auditorium conducts Science film shows, seminars, lectures and other Science contests held within the state of Goa.
Theme Galleries

The science centre also has several galleries with different experimental scientific equipments which comprise of participatory exhibits. The visitors and students can operate, play and observe the exhibits showcased in these galleries.

The Science Park in the Goa Science Center is spread across 4 acres of land covered with lush green lawns and statues and play things which help the visitors have a better and closer rendezvous with the wonders of Science and Technology.

The Goa Science Center is one of the best places to spend the whole day with your family and friends, if they are interested in science and technology. It provides a first hand and memorable experience for children as they get to learn a lot about Science on a single trip.
It is well connected with the city of Panaji as visitors can simply take the City Bus or a cab from any part of the city to reach the place. Located only few minutes of walking distance from the popular Miramar Circle along the Miramar Beach, a visit to the Goa Science Center is worth remembering and even repeated.