The famous Mahalaxmi Temple located in the very heart of Panaji is unarguably the most sacred temple of  the city. Goddess Mahalaxmi – to whom this historical temple is dedicated – is widely considered as the main deity of Panaji city and draws not just Hindu devotees but also Christian and Muslim devotees. This temple also falls in the proximity of the famous The Immaculate Conception Church and Jama Masjid mosque. In fact all these three important religious landmarks belonging to different religions are located on same road itself, which in a way symbolizes the remarkable religious harmony existing in Goa. 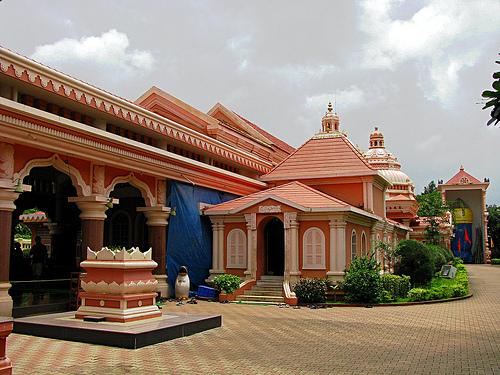 As for Mahalaxmi Temple is concerned, the temple is definitely very beautiful. Being a main temple of the city, timely renovations and maintenance are carried out for keeping temple’s beauty intact. In fact the overall architectural beauty of this temple makes it an as much tourist destination as religious landmark of Panaji city. In addition, the huge idol of Goddesses Mahalaxmi - made completely of black stone and sculpted with four hands - has strong resemblance to the famous Mahalaxmi idol of Kolhapur. And this obviously adds to the aura of temple.

This temple’s legendary story dates back to 16th century, when few Brahmin priests from small Karwar town had arrived in Panaji along with a small marble idol of Mahalaxmi. These pious Brahmins had devoted their entire life to service of Goddesses Mahalaxmi and all they did for survival was beg for alms and donations from devotees. However, they got sniff of Portuguese government’s policy of religious conversion, eventually forcing them to flee Panaji. But, not before hiding the small idol of Mahalaxmi in a horse stable that they had come across while fleeing from Panaji.

This horse stable belonged to a military official working under Portuguese Government. His name was Raghavendra Kamat Mhamai. When he found this idol, he immediately became it's custodian and caretaker. To safeguard this idol from being getting prosecuted from Portuguese officials, he had revealed about this idol only to very close friends.

The construction of the temples was completed in the following year itself, i.e. in year 1819 and the small marble idol of goddesses Mahalaxmi was placed inside the temple. Today that sacred small idol is kept in a small box very near to the main idol and is obviously one of the main attractions of the temple.

On a concluding note, it is apt to say that Mahalaxmi Temple is the most iconic religious place of Panaji city and deservedly so is also one of the finest tourist attractions of the city.