Goa is not just all about beaches, resorts, forts or museums, it is a state that has all kinds of attractions available to hold on to a varied base of tourists every year. It has something for everyone who pays a visit to this versatile state yet smallest Indian state of Goa. 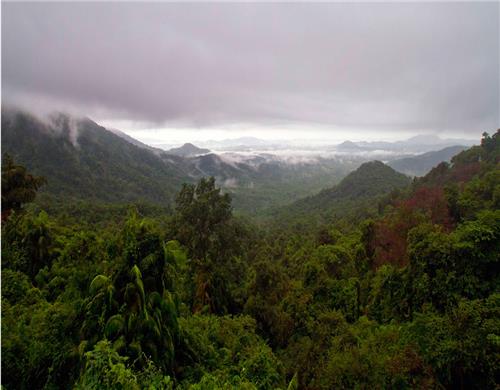 One such wonderful attraction is the combined tour of Mollem National Park and Bhagwan Mahaveer Sanctuary. Situated across a region of 240 kms2, it shares the border of the state of Karnataka and is a part of the Sanguem Taluka of Goa. This area is quite close to the city of Molem, situated near the capital Panaji. The city has inspired a part of the name of the national park and is replete with ancient temples, which date back to the Kadamaba Dynasty which used to rule Goa way back in the past. The region is also home to a type of nomads, namely Dhangar whose primary engagement is to herd buffaloes along with several other attractions such as waterfalls, rich flora and fauna.

This area was initially know as the Mollem Game Sanctuary and later in 1969, it came to be referred as a Wildlife Sanctuary while the core region of this park came to be addressed as Bhagwan Mahaveer Sanctuary. This core area covers about 107 kms2 of area and the whole area along with outer circle of the park, combined came to known as the Mollem National Park in the year 1978. Until now, this name has been retained by the state government of Goa. 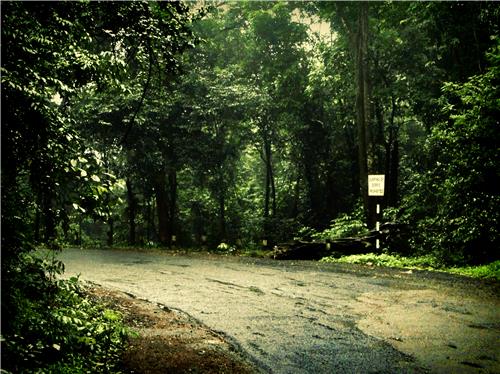 It is an ideal tourist spot for visitors including couples, kids and groups of friends. Although it is suggested that children below 10 years and senior citizens with heart or health conditions should not opt to visit the waterfall area.

Attractions of the Bhagwan Mahaveer Sanctuary and Mollem National Park

There are several attractions available for sightseeing within and around this National park region. Among them the waterfalls and the flora and fauna are the most interesting ones.

With a huge area replete with lush greenery, the park houses a variety of plants, trees, bushes and flowers, some of which are highly popular and also have remedial or medicinal qualities. It is actually a Tropical Evergreen Forest of the West Coast of India and has some Moist Deciduous plants as well. The forest is primarily covered with trees forming massive canopies while grass is barely visible or available other than certain patches covered by trees itself.

Apart from this the place has a huge variety of colorful and bright butterflies such as the Blue Mormon, Tailed Jay, Plum Judy, Common Jezzebel etc with some endemic species such as the Malabar Tree Nymph and Tamil Yoeman. These sweet little things are accompanied by the dangerous reptiles as well which of course include poisonous snakes such as a variety of vipers, rat snakes, Indian rock python and king cobras for which the sanctuary is famous. 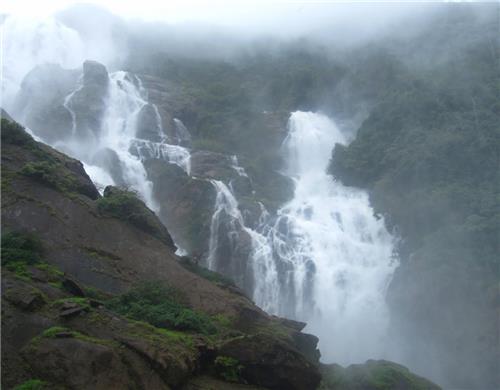 The area also has a beautiful and popular waterfall referred to as the Dudhsagar Falls, meaning the ‘Sea of Milk’ Falls and. The waterfall received its name due to the foamy white water that falls as a result of the force of the height.

It is basically a tiered waterfall situated at the top of the Mandovi River originating from the state of Karnaraka and is 10 kms upstream from Collem village. With a height of 310 meters, it is the highest waterfall of Goa and the fifth highest of India. The most amazing feature about this waterfall is the South Western Railway bridge that passes right through the waterfall. Upstream, near the Collem Village there is ample space for picnics but during the monsoons, that is from June to September, entry is restricted in this region due slippery and dangerous conditions of the terrain.

The Tambdi Surla Temple is a small but exquisite temple which was established in the 12th century and dedicated to Lord Shiva or Mahadeva. Devotees visit the temple on a regular basis and it is only around 13 kilometers away from the Bolcornem village situated towards the northern end of the park.
The temple comprises of a Garbhagriha, a Nandi Mandapa built with basalt within a pillared area and an Antarala. These pillars are embellished with minute and detailed carvings of elephants with chains supporting a ceiling of stone decorated with finely carved Ashtoken lotus flowers. 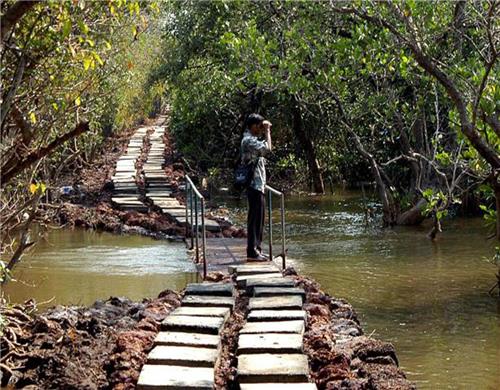 The Devil’s canyon is a great place for those who love to visit eerie places and enjoy the spill that runs down their spine. It is a creepy looking water canyon formed within the downstream fissures of the Dudhsagar Falls. These fissures have been created by serpentine underwater currents on solid rocks.

The Tambdi Waterfall is located around 2 kilometers to the southwest side of the Tambdi Surla Temple, close to the Karnataka border. It is only a few meters shorter than the Dudhsagar Falls and is equally a marvelous sight for visitors, but it does not receive too many visitors due to its difficult and steep terrain. The path is not only steep, irregular, rocky and winding and requires visitors to accompany local and well trained guides.

The Sunset Point is a very famous destination for most tourists visiting the park. It provides a bird’s eye view of the entire park which is absolutely magnificent and unforgettable. The view is that of canopies tree tops spread over a vast area. It can be reached via a zigzagging road carved out of a mountain with a vehicle.

Due to its mineral rich and rocky terrain the area is threatens its visitors with a number of difficulties such as extensive mining at the surface, transport of iron ores and manganese ores, a deposit of toxic wastes consisting of sponge iron by-products of the size of 13 truckloads which was dumped in the year 2006 and of course snakes.

Certain parts of the Mollem National Park are still sections of privately owned lands which need to be acquired officially from the respective owners.

But apart from these small glitches, the park is a must visit since it actually upholds a true picture of how nature should be in a tropical forest and how wonderful yet dangerous nature can be.