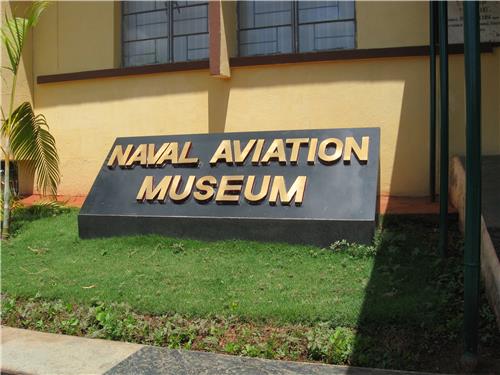 Goa, is a state with several wonders apart from its beaches, sea-facing hotels and restaurants. It is a holiday destination that surprises its visitors with different tourist spots. It has places that can entertain and arouse the interest of any kind of tourist who visits the place. The state is not devoid of religious destinations nor is it devoid of any kind of historical monument but still is more popular as the best partying destination of India. So exploring the unexplored side of Goa can make your trip even more interesting and engaging. In case you are bored of partying and have been to Goa too many times but barely know about the place, then starting with the museums and historical forts or monuments can make a huge difference to your trip. It can change the perspective people have about the state of Goa.

You can begin by visiting one of the most recent museums established only about 6 kilometers away from the port city of Vasco da Gama in Vasco-Bogmalo, namely the Naval Aviation Museum. It is the only naval aviation museum across India as well as Asia and one among the two military aviation museums of the country. The museum was inaugurated very recently in the year 1998 in October and has two separate sections within it-the indoor gallery and the outdoor exhibits. The museum is a part of the naval property situated towards the south of the Dabolim Airport of Goa, only 17 kilometers off the National Highway.

In a short trip of the Museum you can discover a lot about the Indian naval base and its association with the sea-facing state of Goa.

The Trip to the Naval Aviation Museum

The trip to the Museum begins with its beautiful and ecstatic surroundings as it is situated on top of a small plateau overlooking the Arabian Sea. From this museum, even the wide and gorgeous Bogmalo beach is visible adding a wow factor to the location of the one and only naval aviation museum of India.
Among the two section of the museum, the first part of the trip comprises of the outdoor exhibits tour.

The outdoor tour begins with the huge aircraft-Super Constellation, which is the largest among all the 14 decommissioned naval air-crafts that are showcased in this museum and are accompanied by different aircraft engines placed under a separate shed. Some of these air-crafts are known to belong to dates prior to 1940. The rest of the 13 air-crafts aligned in the outdoor park are mentioned and described below:

Short Sealand Mk 2 – The IN 106 model is the only surviving Sealand among the 3 which were crafted in 1953 following the establishment of the Directorate of Naval Aviation. These were the first aircraft models to be inducted after this landmark establishment in the Navy in 1953 and were eventually phased out by better air-crafts in 1965.
Fairey Firefly TT Mk1 – The IN 112 model is the only surviving example in India of those aircraft s which were used by the British during the era of WW2. This was a unique carrier-borne fighter used as an anti-submarine aircraft that was designed towing away targets.

HAL HT-2 - BX 748- This aircraft model was used by the Navy for primary training of Air force offices during 1956-1964 and the one showcased in this museum also has IAF markings on it.

Hawker Sea Hawk FGA Mk 100 - IN 234- This aircraft marked a memorable event in the history of the Indian naval forces. It began its services with the INS Vikrant, who was India’s first Aircraft carrier and delivered its services for almost 20 years.

Breguet Alizé - IN 202- The launch of Alizé in 1961 too, marked a historical moment for India as it was the first anti-submarine and maritime surveillance (ASM) aircraft to have begun its services in our country

de Havilland Dove - IN 124- This aircraft model was crafted in order to replace the Sealands in 1965  as they were being phased out during that year.

HAL Chetak - IN 475-  This particular helicopter entered the Navy service along with INS Vikrant in 1961 ad was designed to be a Search and Rescue (SAR) helicopter.

Hughes Hu-300 - IN 083- The Hughes Hu300 model was a two-seater helicopter which were introduced in 1971 for training helicopter pilots and eventually phased out during the mid 1980s.

Westland Sea King Mk 42 - IN 505- This aircraft was developed in 1970 in order to comply with a kind of Anti Submarine Warfare in the Navy.

Lockheed L1049G Super Constellation - IN 315-This is the primary attraction among all the outdoor aircraft exhibits. The Super Constellation was originally crafted and sent to Air India in 1955 and was named "Rani of Ellora" meaning the ‘Queen of Ellora’. It exchanged hands and was delivered to the Indian Air Force in 1961 and was again sent to the Naval Air Arm in the year 1976. It finally phased out in 1983. 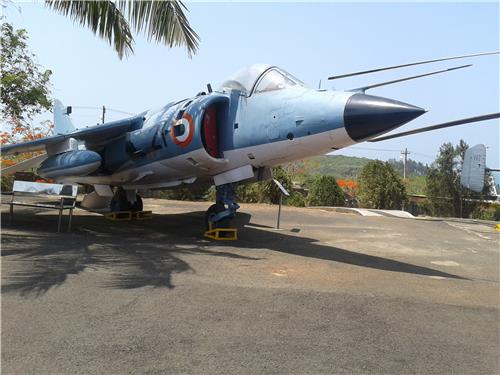 Kamov Ka-25 - IN 573- The Ka-25 was commissioned in 1980 and were essentially meant to serve the Anti-Submarine Warfare (ASW) along with ensuring secondary surveillance and Search and Rescue (SAR) duties.

Sea Harrier FRS.51 - IN 621- This one-seater aircraft was delivered to India in 1991 and was had the qualities of both the INS Vikrant and the INS Viraat air-crafts.

That was about it in the outdoor exhibit section of the Naval Aviation Museum. After this tourists or visitors can proceed to the indoor section of the museum. Although the indoor section may seem a little boring compared to the dynamic outdoor exhibits but it is also interesting if you’re a fan of the Indian Armed forces.
Inside you can read and gather information about the essential battles fought by the Indian Air Force and the Navy. There are several rooms designated to different kinds of display items like ‘Armaments’ which of course display the weapons used by the military of India, then there is the ‘Attire’ room which showcases all the different uniforms worn by the navy and air force men and how they have evolved with time.

There are a number of vintage and rare photographs displayed here along with certain documents, dating back to 1959, which hold a crucial record of the history of the Indian Naval Aviation. The indoor section also has a gallery which holds large replicas of the INS Vikrant and the INS Viraat. Besides these, there is another gallery which has a variety of torpedoes, bombs and canons on display, which were used at by earlier by the Indian navy.

This brings you to the end of the Naval Aviation Museum trip and its closeness to the Dabolim Airport of Goa, there is no problem with hotels or lodging near it. The entrance fee to the museum is as low as Rs. 20 enabling visitors with different budgets to take a tour of the place while it stores displays worth of crores of rupees. Visitors can carry and use cameras without any extra charges and it is open on all days of the week from, 10 in the morning till 5 in the evening.