Home city guide our lady of the immaculate conception church

Our Lady Of The Immaculate Conception Church

Think Goa and invariably beautiful images of churches pops up in our mind. After all, besides beaches, if Goa is synonymous with anything at all, then it is beautiful catholic churches that are spread across the length and breadth of this coastal city. One such beautiful church is Our Lady Of The Immaculate Conception Church, located in the very heart of Panaji city and one of its major tourist attractions. 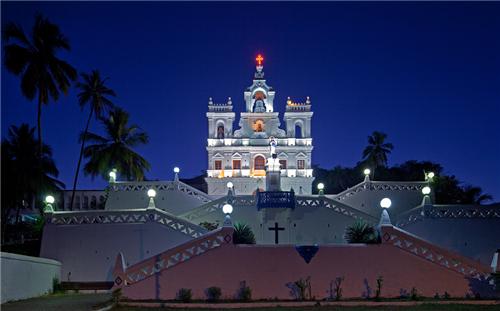 This famous church is dedicated to Lord Mother Marry – mother of Jesus Christ. It has a very simple yet unique architecture. The one prominent architectural feature of this church is the unique side stairways – as is visible from the photo – welcoming the devotees. Other prominent external features are huge bell and beautiful statue of Mother Marry that are located on atop of the church. The huge bell, however, deserves more special attention from visitors, as it is the second biggest bell of Goa and it weights staggering 2250 kgs. Besides, it was imported all the way from Lisbon in 19th century by Portuguese officials.

As for church’s interior features, the church is very simple from inside. However, there are two sacred altars placed on extreme right and left. Altar on the left is dedicated to Jesus, while altar on the right is dedicated to Our Lady of the Rosary. As for people who don’t know what Altar is, it is actually a sacred table in a Christian church on which special offerings in form of food and wine are made

And now about the history of this church. Its history is directly associated with beginning of Portuguese Empire’s 450 year rule of Goa. As this was one of the first church that Portuguese had built when they had landed in Goa in 16th century. So, in a way this church symbolizes the very beginning of era of Christianity in Goa. The construction of this historical church is believed to have been completed in 1540’s. However, interestingly in later decades the church was completely brought down, only to be reconstructed all over again some 50 years later. So, the present church, as we see it today, is actually built on the ruins of the old church. The reconstruction of the new church building was believed to have taken between 1610 – 1620.

Besides, the scenic surrounding adds immense beauty to this church. In fact the church is located on the top of a beautiful hill, which itself is dotted with immense lush greenery. But the more important thing that is worth experiencing is the top aerial view of Goa from the top of the church. The view is simply stunning and really worth capturing. However,the use of camera inside of the church is strictly prohibited.