Most tourists know of Goa as a place to have fun and hang out with friends or a popular honeymoon destination. Very few are aware of the fact that Goa, has certain places that are quite popular as religious destinations and resound the effect of the Hindu rulers in this region which was catapulted by the Portuguese invaders in the 16th century. Even today there are many such heritage religious monuments which have preserved the original culture of the union territory of Goa, predating the Portuguese.


One such heritage is the temple of Shri Ramnath located in the capital of Goa-Panaji in the small village of Ramnathi.  The name of the village, which is also known by the names of Bandode or Bandivade, has inspired the name of the temple and is situated at a distance of about 22 kilometers from the Goa capital. The temple is quite close to the main road leading to Ponda, which is home to another highly popular religious destination of Goa, only a few minutes away from Farmagudi.
There are loads of myths and stories associated with the history and origin of the temple of Shri Ramnath. Let’s find out the interesting lore and history behind it.

As per legend, the original location of the temple was in Rameshwar, which was also the original home of Lord Ramnath or Lord Shiva. The temple is said to have been constructed as a guilt offering to the Lord Shiva. As per the story, after killing the cruel and treacherous Ravana-the king of the land of Lanka, Lord Rama, was quite upset with the bloodshed that took place during the battle. So to seek the pardon of Lord Shiva and seek redemption, he laid the foundation for a temple by installing the ‘Shivalinga’, which represents the creator and destroyer-Shiva, by the shores of the present Rameshwar in the state of Tamil Nadu. This state itself holds one of the largest and most famous temples of lord Shiva in the name of Rameshwar, which is located at the tip of the Indian peninsula in the Gulf of Mannar, also referred to as the Rameshwaram Island. 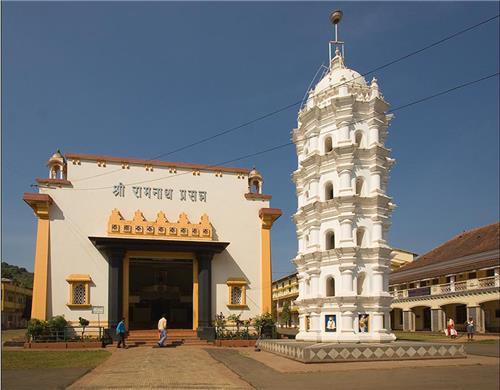 This location was said to have been the original location of the temple of Shri Ramnath of Panaji. It is also believed that the idol of Lord Ramnath was originally housed within a small temple inside a settlement which was known as Lotli and is now known as Loutolim. This original temple was apparently constructed by the Gaud Saraswat Brahmins who had relocated from Rameshwar to the other parts of the southern shores in India.

The temple of Loutolim was actually smuggled out of Rameshwar and taken to its current location at Bandivade, which at that time was under the reign of the Bijapur rulers. This action was forcefully taken to save the temple from destruction by the Portuguese.
Lord Shiva was respected and revered by both Shaivites and Vaishanvites and the name of Lord Ramnath, was inspired by the idol form of Shiva which was worshiped by Lord Rama.

The Structure and Architecture of Shri Ramnath

There is a five-storey tall Deepstambha or Lamp Pillar in the courtyard of the temple. This lamp pillar has the images of several Hindu goddesses and gods at the base. This was the first temple to have Agrashalas among all the temples in Goa, which are guest houses constructed within the campus of the temple. The entire temple is made of contemporary bricks and cement but is among one of the most revered places in Panaji, Goa.

The main festival celebrated at the temple of Shri Ramnath is Shivaratri, apart from which Navaratri is also a celebrated festival within the temple. A special occasion which is known as the Jatra of Samsthan, during this festival the idol of Lord Ramnath is placed in a gorgeous Palanquin and carried all around the town of Panaji.