Located exactly opposite of famous Se Cathedral Church is the St. Cajetan Church, another one of the beautiful churches of Old Goa. Although not as large as Se Cathedral or Basilica of Bom Jesus Church, St. Cajetan Church is however no less beautiful. In fact its unique architectural design coupled with immense lush greenery that it overlooks makes it one of the most beautiful churches of old Goa. 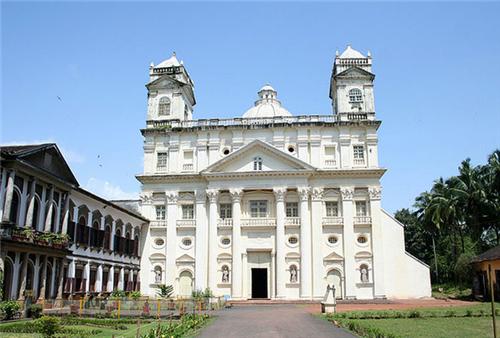 Constructed in 17th century, the entire architectural design of this church closely resembles the famous Basilica of St. Peter Church in Rome. The resemblance is in fact so deep and obvious, that this church gives you a feeling that you’re somewhere in Rome or Europe. And the same is true about interiors of the church, which is also classic European in its architectural feel and equally very beautiful. Don’t miss especially the ‘dome design’ when you’re in the interior of the church, which still looks refreshingly beautiful and is indeed testimony of this church’s architectural elegance.

But, of course the main attraction in the interior is altar of the church (i.e. center of the church) that is dedicated to Our Lady of Divine Providence. Besides, there are 5 more altars that are placed very near to gateway. One of these 5 altars is dedicated to St. Cajetan itself, to whom this beautiful church is dedicated. St. Cajetan was a famous 16th century saint, who played a very pivotal role in spreading Christianity all across the world.

And now finally about history of this church. This church would not have come into being if three Italian missionaries belonging to Theatine Order had not visited Goa during 17th century. Theatine order was founded by St. Cajetan himself for spreading Christianity all across the world. However, three Italian missionaries of Theatine Order were supposed to visit Golconda city near Hyderabad city and not Goa for spreading Christianity.

What eventually prompted them to come to Goa in year 1640 was the fact that they faced continuous problems and hurdles in their missionary activities in Golconda. And in 1651 three Italian missionaries eventually took a gigantic step towards fulfilling their dream of spreading Christianity in Goa by laying foundation of this church. The entire construction was completed in year 1661.

Although in terms of religious importance, this church is less important than nearby Se Cathedral and Basilica of Bom Jesus Church but is certainly no less beautiful than these two churches. In fact many locals and even tourists consider this church as the most beautiful church of old Goa. And you’ll surely agree with these people’s opinion, once you yourself witness this church.